14 people have been arrested after a fire broke out at Napier Barracks in Kent on Friday. The military site has been housing asylum seekers, but there have been reports of poor conditions and several protests have taken place.

The Home Office began loaning the Napier Barracks in Kent last year to house asylum seekers. Since then, there have been many reports of unsafe conditions, including a COVID-19 outbreak at the site that has seen at least 120 asylum seekers test positive.

As well as this, the site has been subject to further controversy over the last year. Just last week, the Refugee Council wrote to the Home Office to demand an immediate investigation after media reports suggested that residents were being told that their asylum claims could be jeopardised if they speak out about conditions at the barracks.

“We are gravely concerned by reports that people seeking asylum could be being bullied into silence about conditions and health and safety risks at the barracks. All residents have a right to a fair asylum hearing and safe, reasonable and Covid-compliant living conditions while they await the outcome of their claim.”

Solomon also spoke out about the use of the Barracks to house asylum seekers, saying:

“The use of army barracks is wholly inappropriate and the government needs to commit to moving all asylum seekers to appropriate accommodation sooner rather than later.”

The Guardian has reported that since the fire, residents have been left without electricity, heating or drinking water whilst many are still recovering from COVID-19.

A journalist documenting a protest at the site has also been arrested. Photojournalist Andy Aitchison was arrested at his home on Thursday on suspicion of causing criminal damage. Aitchison said he was photographing the protest from the road outside of the site and that police seized his memory card out of his camera and took other journalistic materials.

He has been released on bail under the condition that he does not go near the barracks.

If you are claiming asylum in the UK, then you should seek urgent help from a professional immigration lawyer.

Our highly-trained immigration lawyers can support those claiming asylum in the UK as well as assisting those facing immigration detention or deportation.

If you have an urgent immigration issue, don’t hesitate to get in touch with our team today by calling 01618269783, 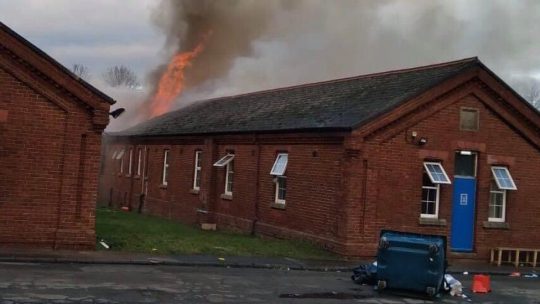 A fire broke out at the Barracks in Kent on Friday : (Image Credit Care4Calais)