The shocking death toll of asylum seekers in Home Office accommodation this year has been revealed, with 29 having died so far. The devastating figures were reported by The Guardian after they submitted a Freedom of Information Request to the Home Office.

The alarming death toll is five times higher than those who have lost their lives during the dangerous journey of crossing the English Channel on small boats.

Clare Moseley, the founder of the Care4Calais charity, told The Guardian:

“It’s shameful that more refugees die here in the UK, in Home Office accommodation, than do so in Calais or trying to cross the Channel. Refugees are the world’s most resilient people. Many have crossed the Sahara desert and made it through the hell of Libya, facing unimaginable hardship to get this far. But the way we treat them in this country is cruel.

“Our government doesn’t give them the basics of life like adequate food and clothing. It locks them up in military barracks and keeps them isolated and depressed in hotels. It keeps them under constant threat of deportation, instead of processing their asylum applications promptly.”

Recently, reports released by Independent Monitoring Boards have found that people seeking asylum in the UK often face inhumane treatment. Issues raised in the reports included a lack of vulnerability assessments, asylum seekers being detained in unsafe conditions and the risk of suicide being at a high level.

In September, Glasgow MP’s demanded an inquiry after 3 asylum seekers died in Scotland. Now, the Scottish Refugee Council has called for all 29 deaths to be individually investigated.

“Today’s figures are horrific. This has been a really difficult year for people seeking safety in the UK. Covid-19 restrictions have merged with extremely hostile immigration policies to create an unsafe environment for people who came here seeking safety.

“Across the country, people are being held in hotel rooms, military barracks and detention centres with no control over their day to day lives, no voice and no end in sight, struggling with loneliness, digital exclusion and poverty. 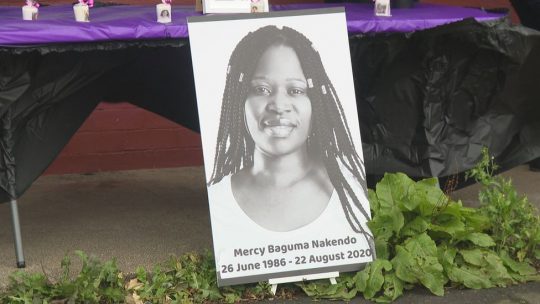 Mercy Baguma died in her flat in Glasgow in August, she had been seeking asylum in the UK (Image credit: BBC News)