The Role of Immigration in Football

Here in the UK, immigration plays a significant role in our culture, from the food we love to the many industries that rely on migrant workers, immigration makes the UK what it is. The role of immigration is also becoming increasingly important when it comes to the UK’s most well-loved sport, football.

There’s no doubt that football is an important part of the cultural fabric of the UK, with a massive 40% of the population tuning in to watch England’s semi-final against Croatia in the 2018 World Cup. In a globalized world, it’s no surprise that immigration is playing an increasingly significant role in the sport. According to the CIES Football Observatory, the percentage of foreign-born players in the 31 main European leagues reached a record of 41.5% in 2018. Following England’s success in the 2018 world cup, the Migration Museum pointed out the importance that immigration had played with their alternative lineup. The lineup removed any players that started that game who wouldn’t have been there without the impact of first- and second-generation immigrants, and just five players remained.

The positive effect of immigration in football

There’s evidence to suggest that this could be having a positive effect on attitudes towards immigration in the UK, with studies finding that when a supporter’s team wins, immigration is perceived positively. One of the best examples of this, is how Liverpool player Mo Salah, is credited with reducing Islamophobic hate crime in Merseyside.

However, it’s not all positive, despite the massive success of migrant players, many players continue to be subject to racial abuse on social media. This week, Instagram have vowed to shutdown accounts that have been racially abusing players such as Anthony Martial and Axel Tuanzebe. Even Marcus Rashford, who was recently awarded an MBE in recognition of his services to vulnerable children in the UK throughout the pandemic, has been the subject of racial abuse.

It’s clear that football has the potential to set a great example for society, and could be used to teach tolerance and acceptance of diversity in the UK, but there is still a long way to go to rid the UK of the racism that remains present.

Our highly-trained immigration lawyers can assist with a wide range of immigration issues, including applications for work visas. 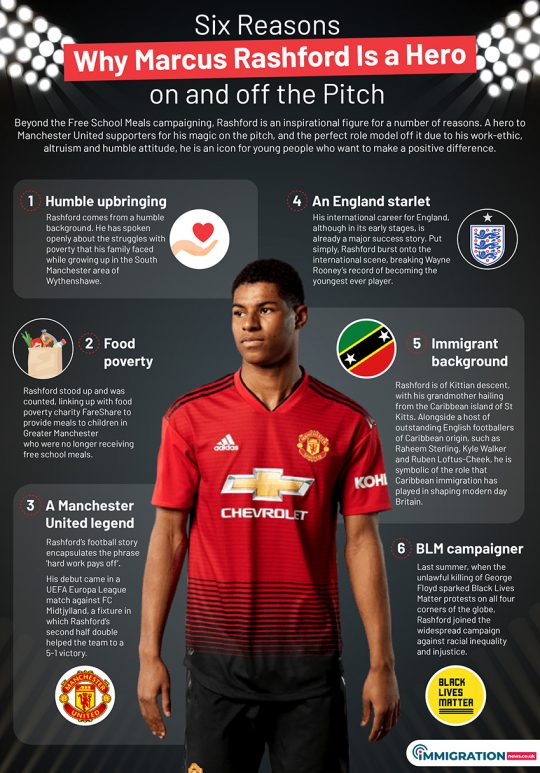 Even Marcus Rashford, who has been labelled a hero by many, has been subject to racial abuse